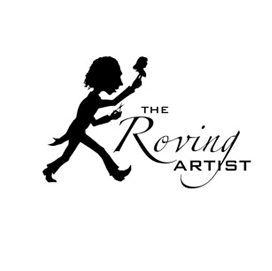 Charles cut his first silhouette in 1989, starting with his then-six-month-old daughter. Since then, silhouettes have grown from an absorbing hobby, to a means of earning a living and finally to an all-encompassing passion. His career began rather inauspiciously as a street portrait artist in London’s Covent Garden. This was where he sold his first silhouettes. Unable to find any living silhouettists he quickly realised that almost nothing is known about this lost art and that he would need to teach himself. In 1997 Charles left Covent Garden and rebranded himself as The Roving Artist, available to cut silhouettes at corporate events, weddings, and charity dos. Since then he has cut his portraits at venues all over the world.
Charles has cut over 200,000 silhouettes, including two portraits of the Queen, one of President Clinton and a whole host of TV personalities, writers, artists and sporting celebrities. In 2020, when the Coronavirus pandemic brought an abrupt halt to all the events at which he was booked, Charles quickly moved his work online. He began running a series of virtual studio days at: www.silhouettist.uk
Charles is the author of “Mastering Silhouettes” (which looks at the techniques of silhouettists from the 1760s to the present day) and the presenter of “Silhouette Secrets”, an entertaining TV documentary about the practice and history of silhouette cutting. This recently-released film has so far won a number of awards, including “Best Documentary” in both Houston and Barcelona, and is currently seeking a UK Premiere. For further information about Charles’ work as a silhouettist today please visit: www.roving-artist.com